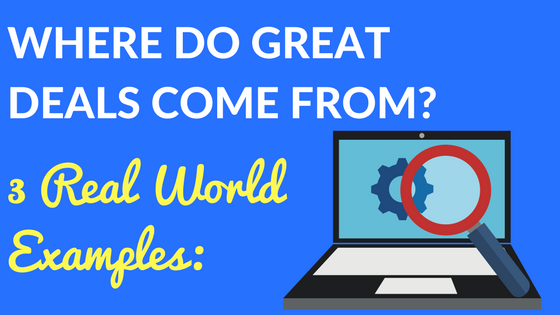 The most challenging aspect of doing your own real estate deals, especially early on, is sourcing great opportunities. It’s finding that first deal that you’re willing to stake your entire reputation on and go all-in.

While I’ve shared the secret to deal sourcing and how entrepreneurial real estate operators efficiently source deals, the truth is that great deals don’t come from any one source.

Rather, great deals are sourced by great operators.

Great operators who know their asset class and market inside and out.

Great operators who’ve built trust with a network of investors, lenders, and brokers.

Great operators with a history of successful execution.

In this post I walk through 3 examples of how we sourced some of our best deals.

In early 2013, we acquired the value-add office property from a regional REIT. While REIT’s are typically professional owners, there are times where they own an asset that’s no longer a fit for them. It could be in a submarket that’s no longer a focus, too small for them as they’ve scaled up, or the vintage/quality of the asset may not fit their current investment target.

In this instance, the REIT ownership turned out to be detrimental as the property was simply “lost in the shuffle.” The in-house leasing team was based over 40 miles away and was too consumed with their portfolio’s larger, closer-in assets to focus on the asset.

Buying from a REIT also had several advantages on the capital side, as these institutions are known for spending money on capital items “under the hood,” effectively minimizing deferred maintenance costs for the next buyer.

Lesson: Just because you’re buying from an institutional-quality firm doesn’t mean there isn’t meat on the bone.

In this case, there was upside in bringing in a local leasing team who knew all the players in the submarket, implementing a renovation program, and getting to know the tenants on a personal level. We were able to increase occupancy from 76% to 95% in the first 12-months and refinance within 24 months, returning a significant portion of equity to investors.

In 2016, we bought a value-add apartment community in a tertiary market. The Property was being sold by an individual who was not primarily a broker by trade. The individual specialized in land acquisitions and was interested in an adjacent land parcel that the seller of the property also owned.

After inquiring whether the land might be for sale, the individual was told that the land was not for sale but that the owner would consider selling the apartments, and asked the individual if he would be interested in listing the Property for sale.

He agreed and kicked off what was a very atypical marketing process with limited reach, formality, and sophistication. We were quickly identified as the most credible buyer (but not the highest offer), and were able to execute an LOI at an attractive purchase price.

Lesson: Deals are often mis-marketed because they’re being sold by the wrong broker.

In this case, the unsophisticated owner tapped a land broker to sell an apartment deal. It’s common for owners to give a listing to a friend or someone who’s in the right place at the right time, although that person may not be the best broker for the deal.

The deal is unlikely to get exposure to the optimal buyer pool or the mis-marketing may lead to the asset becoming stale. By being active in the submarket, we were able to access the mis-marketed opportunity.

In 2014, we acquired a regional mall being sold by an estate of an old-line family’s patriarch who recently passed away. This was the only commercial asset owned by the estate and was a non-core asset in their portfolio.

The estate hired a broker who was about to retire to market the asset for sale with whom we had a relationship. Given the relationship, we were awarded the deal, despite being more than $1M below the highest bidder.

Furthermore, the potential buyer pool was limited as publicly traded mall REITs are focused exclusively on core submarkets, the deal size was too large for local mom & pops (who typically prefer apartments), and the mall segment in general has been receiving a lot of negative publicity in the popular media, making it an “unsexy” asset for emotional investors.

Lesson 1: Relationships and reputation are everything in real estate. Every deal you bid on, the broker/seller must be convinced that you’re able to close on the transaction and execute the deal.

We’ve done 40+ deals over the past 7 years, buying from every source imaginable.

What we’ve learned is great deals come from all different sources, but they always find their way to great operators.